In this article an at90s2313 is used to send the string "hello, world!" to a PC via serial cable, and echo strings that are sent to it. The first part basically repeats the process of the previous article, pic_serial_communication with a different MCU. The second part, tests the receive operation of the MCU, and is the first step to creating peripheral devices.

Author's note: Unfortunately, the AVR UART library (see html and html) did not seem to work for this chip. If you are using a different MCU, it's ALWAYS better to use the library.

The hardware used was:

To enable serial communication, the pins on the MCU must be set, as well as configuring the correct registers.

The UART module has a data register (UDR) a control register (UCR) and status register (USR). Both the UCR and USR registers need to be set for serial communication. The UCR is described below.

The USR is described below.

The datasheet for both the at90s2313 (see pdf) and AVR-P20 (see pdf) were referenced heavily during the writing of the UART library.

Initially, this code didn't work. To troubleshoot, PD0 and PD1 were set as GPIO pins (i.e. RXEN = 0, TXEN = 0) and switched on and off with a 1000ms delay. They were measured with a DMM to ensure they were working. A different power supply and new MCU were also tried to no avail.

After inspecting the ST232C manual (see pdf) it became clear that the problem was with the wiring. In hindsight it's obvious, but for the benefit of others, always connect the TX pin of one device to the RX pin of the other. The board was rewired such that RX was connected to PD1 and TX was connected to PD0.

This code both transmits data to the PC, and echos data it receives from the PC using interrupts. The ouput is shown below: 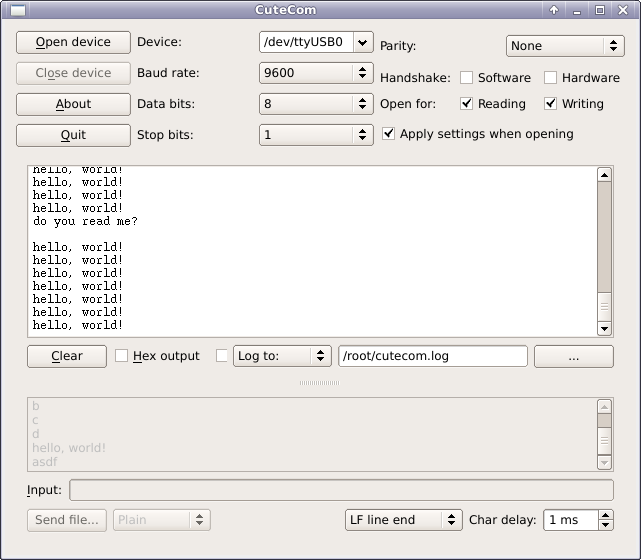 Note the string "do you read me?" was entered in via the terminal and echoed by the MCU.

Serial data was transmitted to and from an at90s2313 dev board via a serial cable.