The motivation for this article was the ability to control devices using pulse-width modulation (PWM). A PWM voltage is a square-wave signal. The mean voltage of this signal is changed by changing the fraction of time the voltage is on (known as the duty cycle) during each period (see Figure 1). 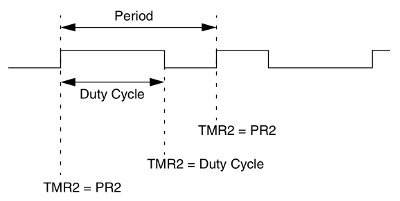 So, for example, the mean voltage for a 50% duty cycle is half the supply voltage.

The hardware used was:

The PWM period is determined by the PR2 value as follows:

where TOSC is the external clock period, in this case, 1/20e6 = 5e-8. The TMR2 value is incremented on each instruction cycle (FOSC/4).

When TMR2 == PR2, the main loop is interrupted and the following routine performed:

with the following caveats:

The CCPx and CCPRx registers are part of the PWM module.

PWM is controlled via CCP (capture/compare/pwm) modules. The pic18f4550 has two such modules, each operated using a control register, CCPxCON, and a data register, CCPRx.

The control register is:

The data register is composed of two 8-bit registers: CCPRxL and CCPRxH. The CCPRxH register is read only. The CCPRxL register, along with the TMR2 prescale and PR2 register are used to set the PWM duty cycle and period.

effectively controls the brightness of the LED.

For the pic18f4550, CCP1 corresponds only to pin RC2 whereas CCP2 can correspond to either pin RB3 or RC1, depending on whether CCP2MX is 0 or 1 respectively. To begin with, an LED and resistor were wired up to RC2.

To set up PWM mode, the following was done:

First, the correct TRIS bit had to be cleared:

The clock is 20MHz, so the combined prescale/postscale value was set to 256

Note that CCP1CON<5:4> is set to 0 here. They will be set again when defining the duty cycle.

TMR2 and PR2 are both 8-bit, so have a maximum value of 255. For the highest resolution, set PR2 to the maximum value.

Thus, the PWM period is:

The brightness of the LED can be varied from 0 to 100% by varying the duty cycle from 0 to 4*256 = 1024. This is the full range for a 10-bit number, but, as we saw earlier, it's stored across two locations. To implement this, the number was split up using #define commands.

A quick blink program was constructed to test

The next step was to vary the brightness in a linear fashion. To do this, the main function was changed to

With this, the LED gradually brightened from off to on about once every second. Ideally the duty cycle and period should be verified with an oscilloscope, but I don't have access to one.

For practical purposes, PWM control has been implemented.

Creating a sine wave using PWM is one way to convert from DC to AC voltage, so it's worth attempting. The first step towards this is to brighten an LED in a cyclic manner. There were two ways to approach this:

This ODE can be updated numerically. A Euler update simply involves multiplying the gradient by the timestep and adding to the state. For a timestep of 0.1, this can be coded as follows:

Simple, right? Unfortunately, there is both round-off error (due to the use of ints) and error in the update method. This error results in the value of duty_cycle either going to 0 or +/- infinity after a sufficient number of cycles.

Each period is roughly 6.3 radians, or 63 steps in our method. Thus, on the 64th step, the values were reset to 0 and 511. In addition, floats are used instead of ints. (Compared to using a list of duty_cycle values, using floats is still more memory efficient.)

The resulting values and the corresponding sine wave is shown in Figure 2. 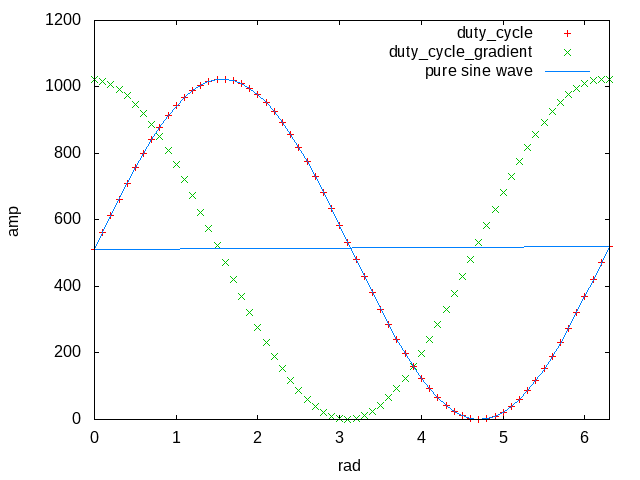 In the end, the code was quite concise.

A video of this firmware controlling the brightness of an LED is shown in Video 1.

Video 1: PWM controlled LED cycling on and off.

Couple this pwm control to a buck-boost circuit for DC to AC power conversion.