In a previous article (see html), problems were met developing a toolchain for the PIC18F4550 in GNU/Linux. Specifically, it was found that neither picp, picprog nor piklab-prog were able to program pic18 MCUs using the Picstart Plus programmer. It became a choice of either being restricted to pic16 MCUs or using a different programmer. The pickit2 has the best support under GNU/Linux and allows for both programming and debugging. After a bit of reading I decided to build a clone, specifically the one from ObdDiag (html).

This project wasn't complicated, but a few things were accomplished:

The board was commissioned from OSH Park without any changes to minimize the number of potential problems. Note that the parts list (html) did not correspond to the schematic (pdf). In particular, a few additional resistors (three 470Ω and one 1kΩ) were needed. Apart from that, ordering the parts and building the board was a relatively straightforward process (see Figure 1). 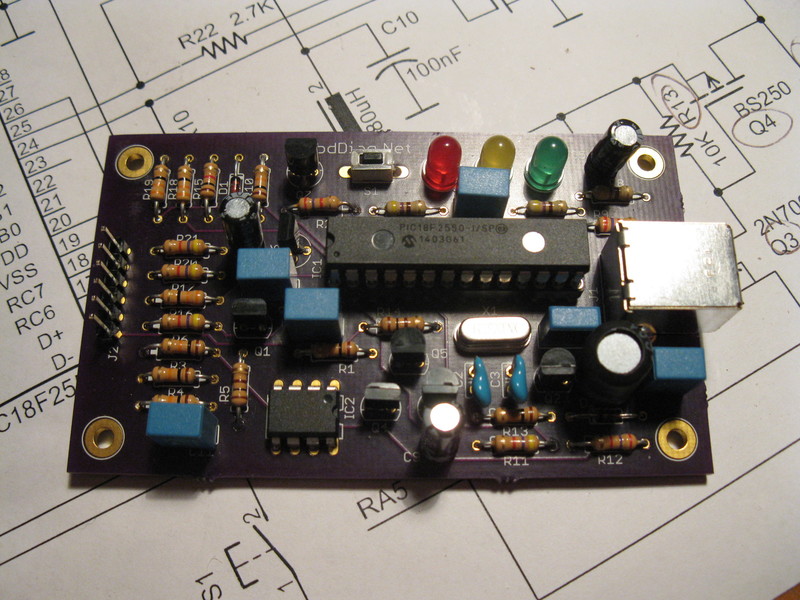 As is often mentioned, there is a bootstrapping problem with programmers -- that is, you need one to make one. Fortunately, the Picstart Plus can flash pic18s with MPLAB-8 (html) just fine in Windows. So it was used to flash the pickit2 v2.32 firmware (hex) to the pic18f2550. To do this, enable the programmer, load the hex file with File->Import then flash with Programmer->Program. If the programmer isn't detected, check you have selected the correct COM port (check the Windows device manager). If the programmer is detected but the hex file doesn't upload, make sure you have selected pic18f2550 as the target chip.

After transplanting the pic18f2550 micro to the pickit2 board it was time to test. Windows detected the pickit2, but it should be noted that the programmer didn't show up as a COM port in the device manager. The blink program (html) was compiled with XC8 compilers and uploaded to the PIC18F4550 development board without any problems. Programming with a pickit2 was an order of magnitude faster than the Picstart Plus, which was nice.

Now that the pickit2 clone was known to work, it was time to test it in GNU/Linux. After some initial confusion it was found that, unlike the Picstart Plus, this programmer is not a serial device. Instead, you'll need to manually create a new rule to tell udev what to do with it.

then plug in the pickit2. This is the kernel device monitor which detects newly plugged devices. In particular, it shows the device path which can then be used to find its attributes:

From the output, the following attributes were found:

These numbers are specific to the pickit2 and are used to identify it. Create a new file /etc/udev/rules.d/50-usb.rules as root and enter the following.

Upon plugging in the device, a symlink called /dev/PK2 should be created. Make sure to add yourself to the uucp group to be able to write to it.

Now the actual programming, right? Nope. After a bit of reading, I found that piklab-prog is not compatible with the pickit v2.32 firmware on the pickit2. So the options were to either downgrade the firmware or scrap piklab-prog. After a bit more reading I decided to use the Microchip sanctioned software, pk2cmd, instead. This, fortunately, worked with the command:

Hooray! Time to update the makefile. I should note that, while the blink program worked, the time between blinks was much longer. This probably had something to do with the configuration bits and/or the clock speed.

Now that the board is tested and known to work, it's possible to make small changes, if one were so inclined:

The next step of the toolchain is the compiler. The next article will focus on this, specifically the differences between the XC8, XC16 and SDCC compilers. The choice of compiler is significant since they compile slightly different variants of the C language. Once you have invested a lot of time with one, writing libraries and such, it will be difficult to switch.